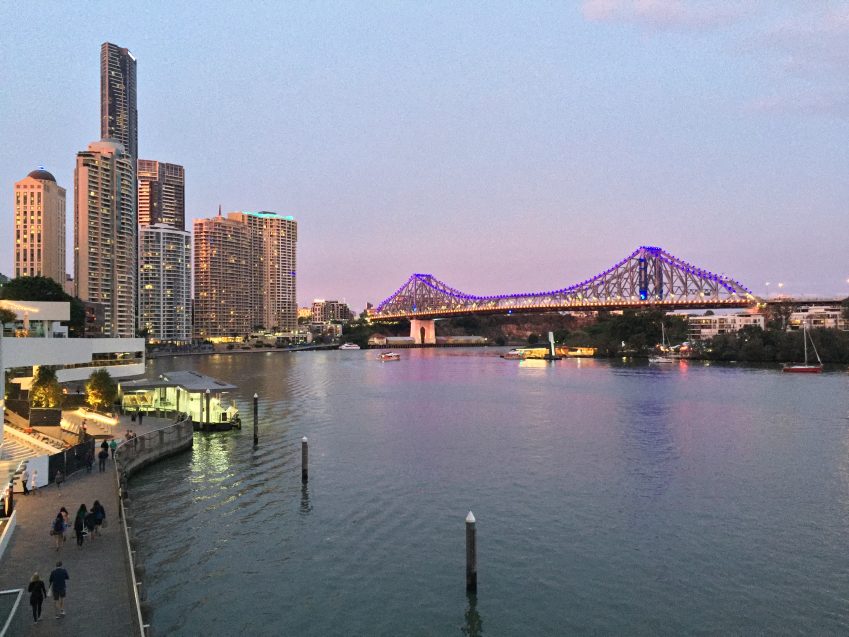 I was born by the Isar and spent my teenage years on the Eisbach, I had good times by the Stockton river and its delta, went to university and later worked in two capital cities on the Danube, and lived by the Limmat for a few years before moving by the Thames; and for the last three plus years, I have had a wonderful time by the Salzach. I guess a place I could never live in is Saudi Arabia: it has no permanent rivers at all.

Rivers are the only place where you can see your history, present, and future all at the same time, where these times literally merge into each other: the water you see flowing right in front of you (the present) is connected to both the future (i.e. the water that will be the present shortly) and the past (the water that was the present a few moments ago and the future just before that).

Anyway, I thought of all this while sitting by the Brisbane River. Named after the Governor of New South Wales, Thomas Brisbane, in 1823, the 344 km long Brisbane River is the longest in the South East region of Queensland, Australia. 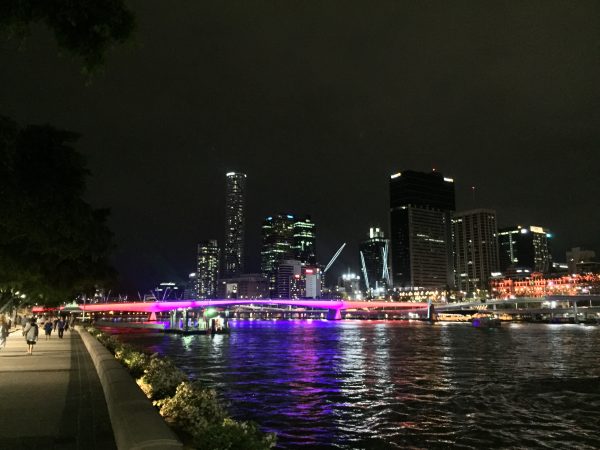 The Brisbane River forms an integral part of the city, where, unlike rivers in many other large cities, it meanders through, slowly crawling from Indooroopilly past Saint Lucia to South Bank and around the Central Business District, embracing Kangaroo Point and passing underneath the iconic Good Will Bridge, around to Brisbane Powerhouse and Portside Wharf like a sluggish snake, before emptying into Moreton Bay. It feels very present at all times and forms an important component of Brisbanians’ leisure time options. 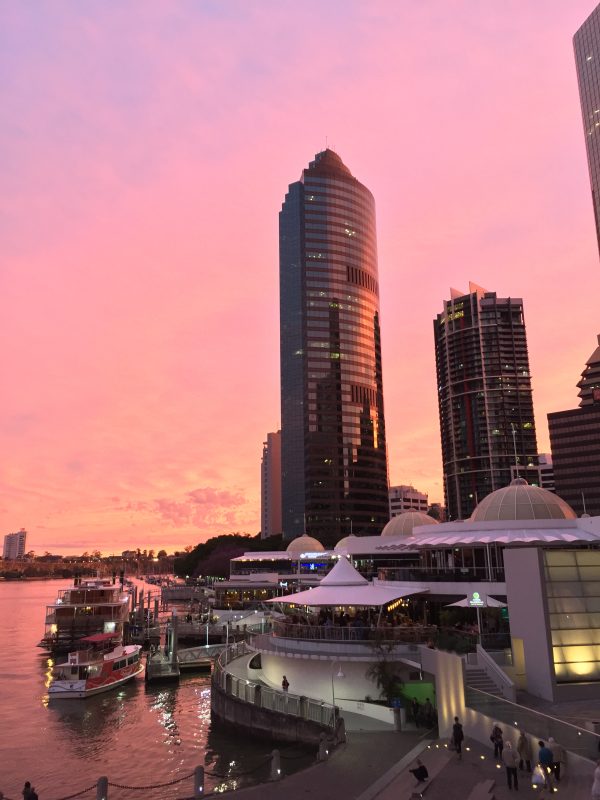 The river itself is popular with jet skiers, rowers, SUP boarders, kayakers, and sail boats, whereas those preferring to stay ashore have a range chic cafés (try Bar Pacino), buzzing bars (Riverbar & Kitchen is a great watering hole) and elegant restaurants (amazing: Madame Wu, a chic Japanese fusion diner opening into a semi covered terrace overlooking the river and the iconic Goodwill Bridge – the perfect spot for a sundowner and people watching, while enjoying some of the best dumplings I have ever had!) to choose from. 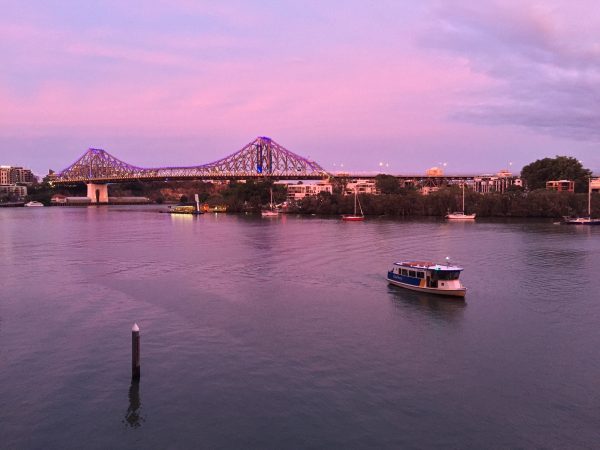 All of these are connected via a boardwalk, partly suspended above the water. It’s perfect for running, biking, or casually strolling along, mingling with the city’s hipsters, the chic and the elegant. As I was wandering about, soaking in the vibrant atmosphere, I noticed only seemingly happy (and very handsome) people. Asking whether the fancy outfits were the result of a particular event, the bartender looked at me with a puzzled expression, explaining: “It’s the weekend. You dress up!” Awesome!

Strangely, and in contrast to the city’s relaxed general atmosphere, there are surprisingly many warning and Do-Not-signs, some of which make more sense than others: While “No Segways” makes sense along the busy, tiled boardwalk, I just couldn’t understand the necessity of the “No Horseback riding” sign right next to it. How many people in the business district own stables? Still kind of awesome though. 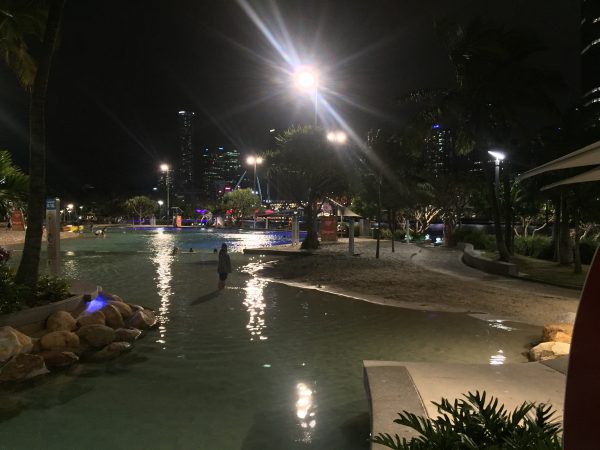 What further struck me, positively, is the wide range for free things available to Brisbanians and visitors. Whether it is a ride aboard the aptly named City Hopper, a ferryboat that will take you up and down the river, the free Wi-Fi that’s available throughout town or the large, sand bottomed lagoon pool along South Bank, which is open round the clock, 24/7. 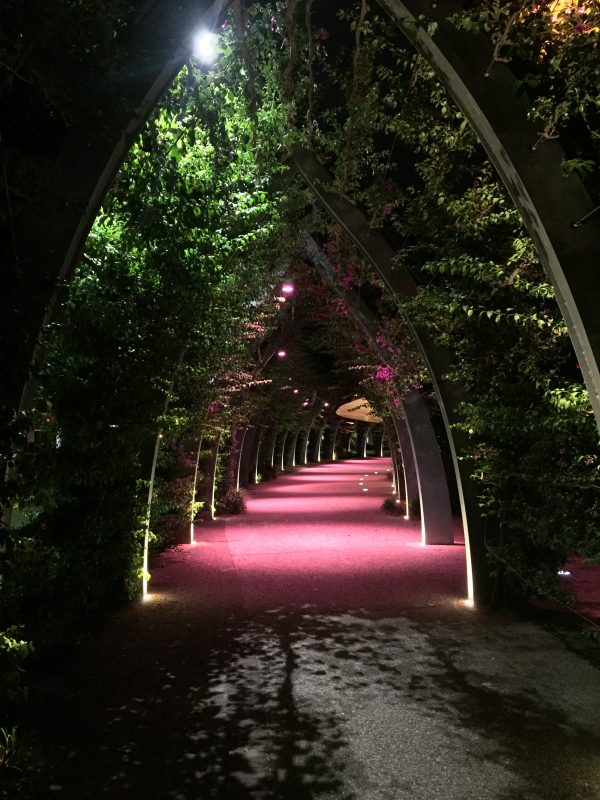 Around the river bend and past the iconic Wheel of Brisbane, you eventually reach he State Library, which also overlooks the river and the Central Business District’s high-rise dominated skyline. The Library offers a range of dedicated spaces for creative workshops, private classes and even a computer room with the latest Macs with the latest software for underprivileged teenagers to use. It seems like a great idea, but what makes it truly awesome is that all of this is once again free. Inquiring about who would be paying for all of this, the director nonchalantly says, as if this was perfectly normal and a matter of course: “The government”. 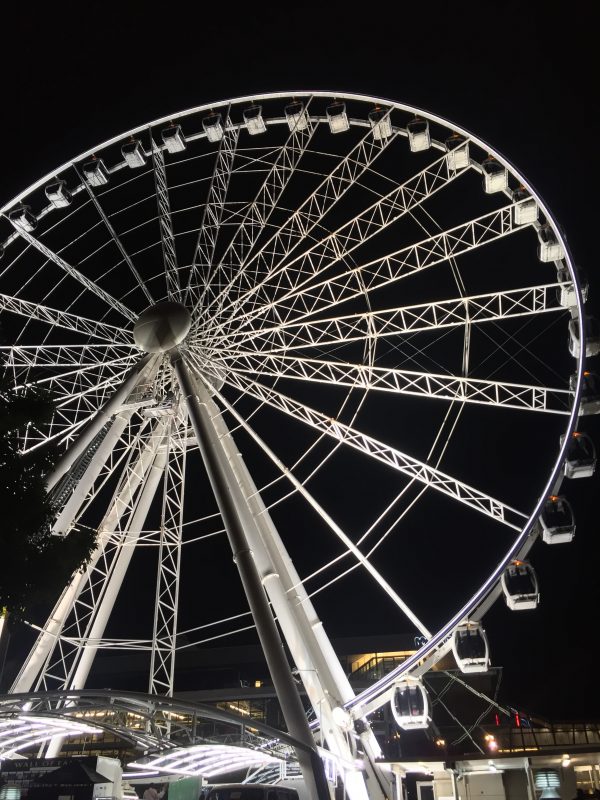 The Library is right next to the Queensland Performing Arts Center (or QPAC), the city’s cultural hub, where one can find a range of theaters, gallery space, and cinemas, lined with more exciting bars and restaurants, filled with joyful crowds of locals. With so many awesome things, all these elegant and friendly people it felt almost too perfect. I was thus relieved when I finally encountered a grumpy person! When trying to board the City Hopper, the captain barked at me “Ya can’t bring ya coffee on board, mate!” It was good to see that there are some unfriendly people in Brisbane, too or I would probably haven’t left, so all I replied was, “Awesome, mate!”.

Where to stay
Stay at the brand new, stylish, and perfectly located Swiss-Belhotel and treat yourself to a river-facing suite!