When Ferdinand Magellan first sailed this archipelago nearly 500 years ago in his attempt to circumnavigate the globe he sailed through a passage from the Atlantic into the Pacific Ocean (later named after him, ergo the Strait of Magellan). From his ship he saw clouds of smoke rising from numerous fires lit by indigenous tribes along the coast and he consequently named the land tierra del humo, land of smoke. The Spanish King Carlos I. didn’t think that was poetic enough and so later renamed it tierra del fuego, land of fire. 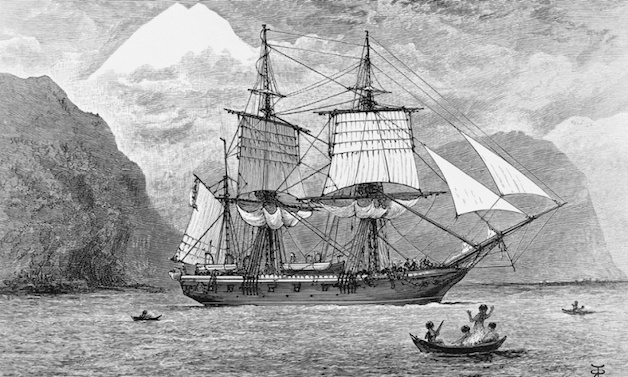 It wasn’t until 1833, that Captain Robert FitzRoy undertook an expedition to explore Tierra del Fuego, taking young Charles Darwin along as a self-funding extra. On this voyage aimed at conducting hydrographic surveys FitzRoy sailed through a channel later named after his ship, the HMS Beagle: the 240 kilometre (150 mi) long and 5 kilometre (3 mi) wide Beagle Channel, dividing Tierra del Fuego between Argentina and Chile, is one of the three navigable passages around South America between the Pacific and the Atlantic.

Although sailing to Ushuaia was tempting, we chose to travel by air instead and the spectacular approach over the channel, snow capped peaks and glaciers rising up either side, was absolutely phenomenal. Furthermore, landing in Ushuaia is one for air travel freaks like me: world’s southernmost commercial airport – check!

Outside the terminal it’s grey and cold, with a stiff, salty breeze blowing – although it’s spring the temperatures here can be rather frosty. But shining through the cold afternoon like a ray of sun is the friendly smile of our hotel’s Concierge Lorena, who is here to pick us up: “Bienvenido al fin del mundo!”. 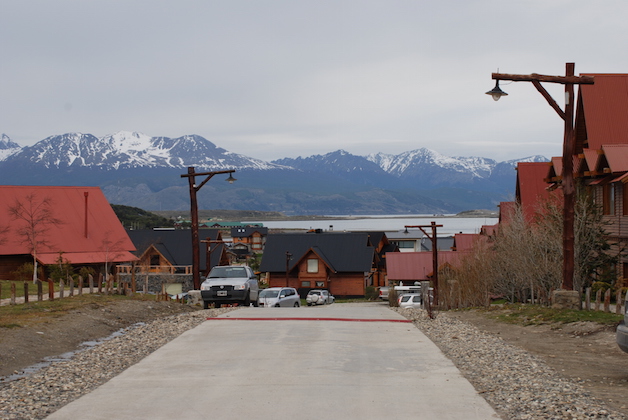 We drive through Ushuaia, which features a distinctive frontier atmosphere with its small, sturdy houses with their corrugated iron sheet roofs and within less than 15 minutes we arrive at our base for the next days: Los Cauquenes Resort + Spa + Experiences. 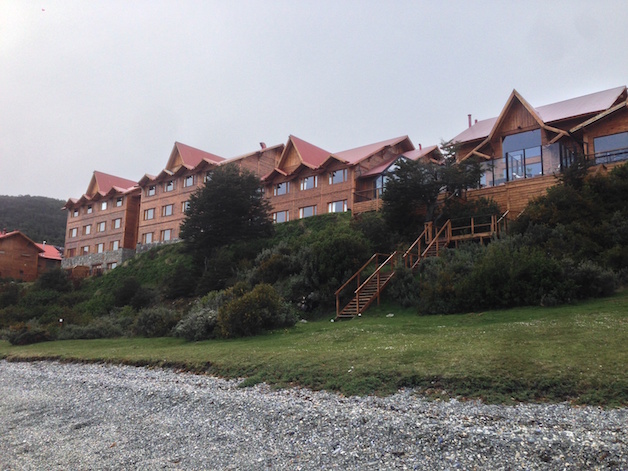 Nestled in a small residential area, the wooden, chalet style five-star hotel is idyllically located right on the calm shores of the Beagle Channel. Inside, the lobby reveals a large fireplace with crackling logs and huge, panoramic bay windows overlooking the channel.

What an atmosphere, what a view, what a fantastic sense of solitude! 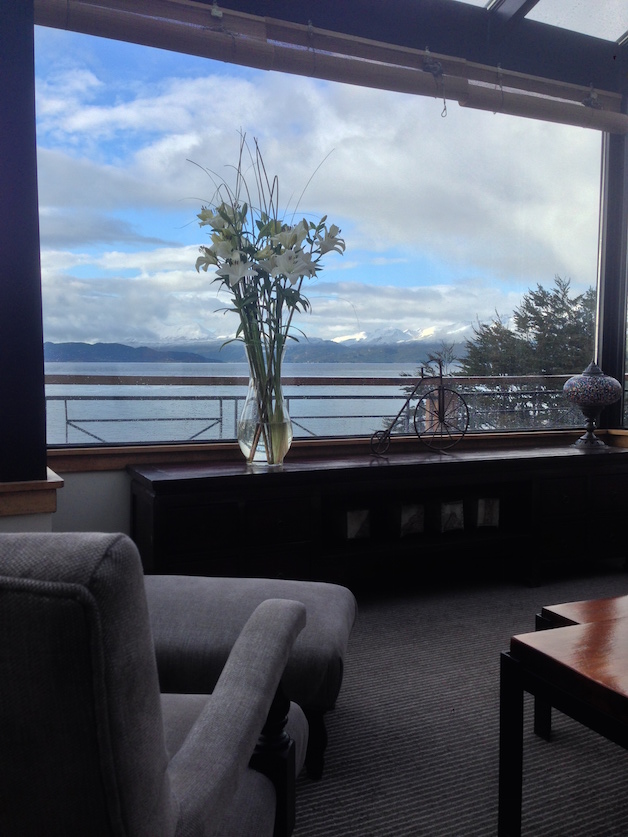 I fall into a soft, cozy armchair by the window, my eyes wandering over the scenery as the grey sky slowly fades to black, small mountains on the Chilean side as a backdrop, the myth-enshrouded Cape Horn a mere 150 kilometres away. Hardly have I experienced such a remote environment while being in such luxurious surroundings (except perhaps on Little Corn Island off the coast of Nicaragua, but that was a different form of luxury altogether). 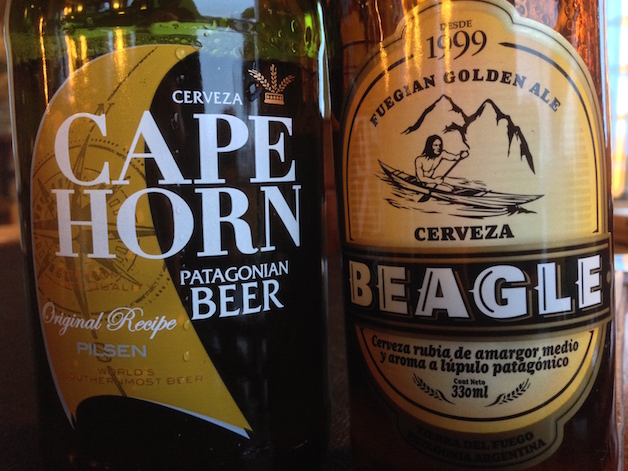 After a few local craft beers we settle for an excellent king crab dinner at the hotel’s restaurant. The locally sourced crab comes in every form imaginable down here, from sashimi to carpaccio to salad, and even pizza – the perfect supper before our grand Beagle Channel expedition tomorrow. 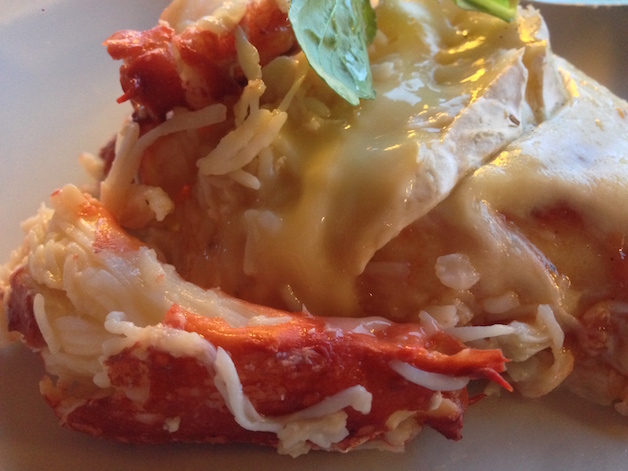 Founded in 1884, Ushuaia’s name is derived from a word of the indigenous Yaghan, meaning “bay facing East”, a fact you are reminded of by a spectacular sunrise shortly after 5.30 am. 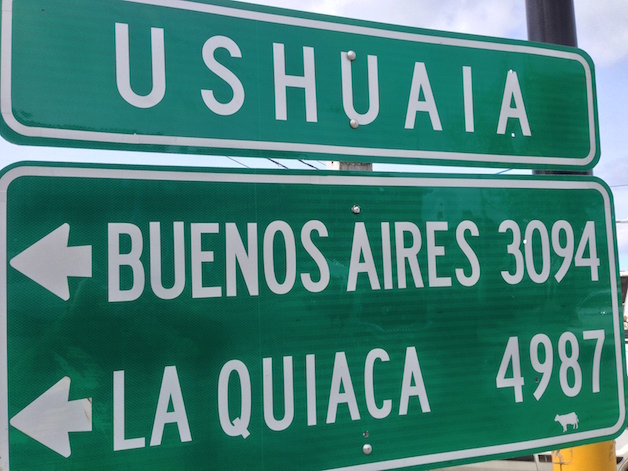 Our expedition turns out to be a luxurious one, the opposite of what Magellan, FitzRoy, and Darwin had to go through: after a delicious breakfast we are driven to the port, where we board the Akawaia, Los Cauquenes’ private 8-seater boat. 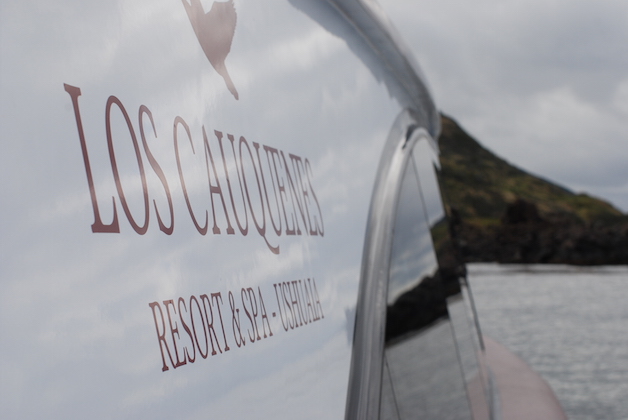 We leave the harbour going North, first sailing along the coast, then towards Alicia island. This must be an ornithologist’s heaven: Antarctic doves, steamer ducks, upland geese, and kelp gulls surround us. 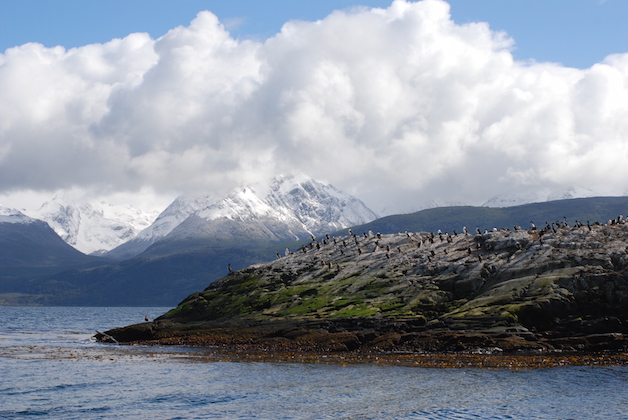 Onwards past the small island of Mary Ann and towards the tiny Les Eclaireurs islets with their iconic lighthouse, the faro del fin del mundo: this 10 metre high, windowless brick tower, topped by a black lantern housing, has been guarding the sea entrance to Ushuaia since 1920. 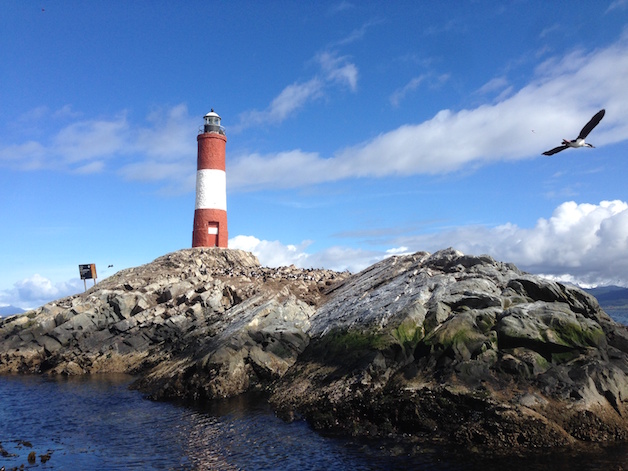 On the next islands we see colonies of cormorants, fur seals and sea lions sunbathing. Apart from the privacy on board, the Akawaia features another distinctive advantage over the larger tourist ships: its small size allows approaching the islands to the point where you can almost touch them. 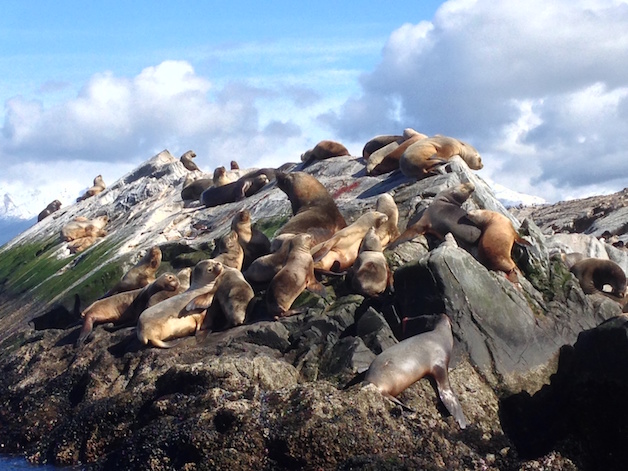 The landscape is simply breathtaking: the red-white-red painted lighthouse, surrounded by water, the snow capped peaks of the Vinciguerra and Martial glaciers in the distance. 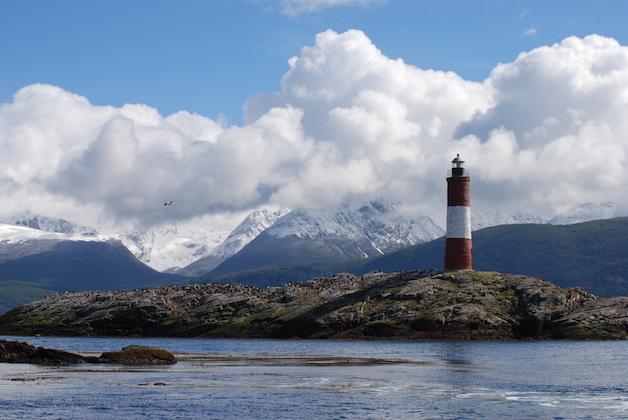 When Darwin first saw these glaciers in January 1833, he noted: “It is scarcely possible to imagine anything more beautiful than the beryl-like blue of these glaciers, and especially as contrasted with the dead white of the upper expanse of snow.” I couldn’t agree more, or as I wrote down into my notebook: “Wow!” 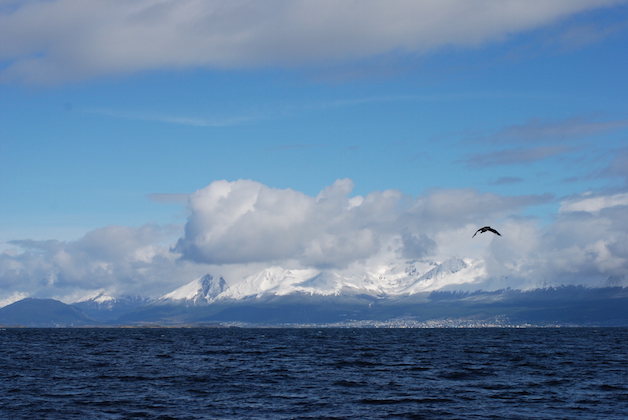 Invigorated by snacks and fresh coffee served on board, we continue our voyage and land on a small island in the middle of the channel. We’re on ancient Yaghan territory now. Laura, our guide, points out the remains of a small settlement, where this fascinating culture once thrived for nearly 10,000 years. 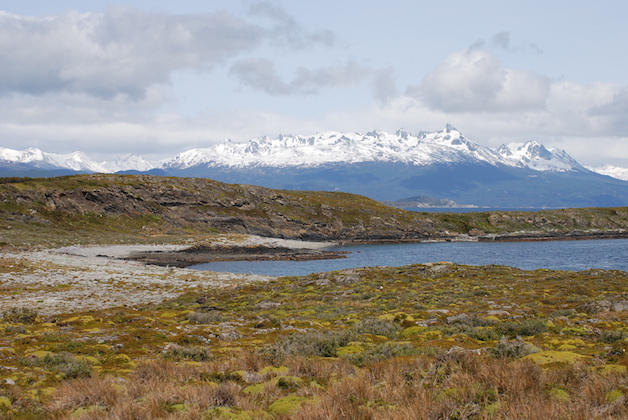 Darwin, however, was not so impressed with the Yaghan when he first encountered them, describing them as “miserable degraded savages”,”poor wretches […] stunted in their growth, their hideous faces bedaubed with white paint, their skins filthy and greasy, their hair entangled, their voices discordant, and their gestures violent. Viewing such men, one can hardly make oneself believe that they are fellow creatures and inhabitants of the same world.” 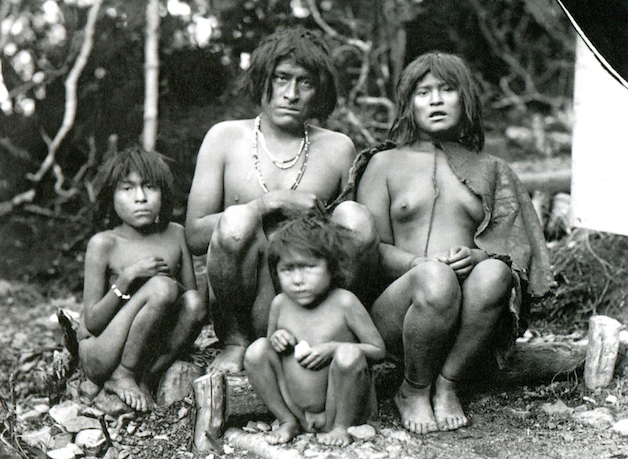 With our functional high-tech shell jackets zipped up, a beanie over our heads, and the cold wind in our face it’s hard to believe that in this rough climate the Yaghan used to live naked. While I find that astonishing, Darwin once again was not impressed: “These Fuegians in the canoe were quite naked, and even one full-grown woman was absolutely so. At night, five or six human beings, naked and scarcely protected from the wind and rain of this tempestuous climate, sleep on the wet ground coiled up like animals.”

After a short stroll around the island our cruise concludes as we sail back to Ushuaia. We grab a quick lunch (more king crab!) at the quirky Bar Ideal, before returning to Los Cauquenes and embarking on another expedition: the hotel’s excellent spa and outdoor jacuzzis overlooking the channel also want to be discovered! 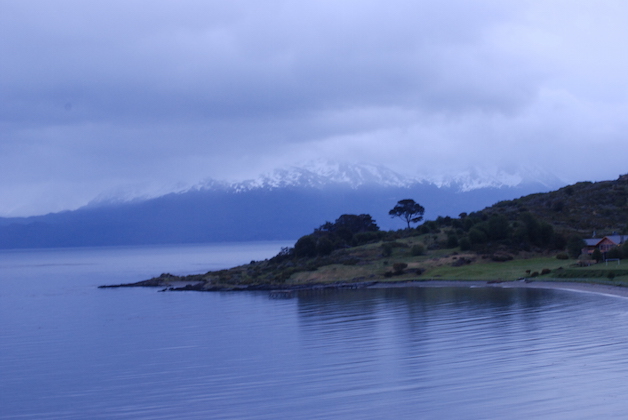 Magellan never set foot on the land here when he came through on his expedition in the 1500s, but had Los Cauquenes been around back then, I doubt he would have ever left again.